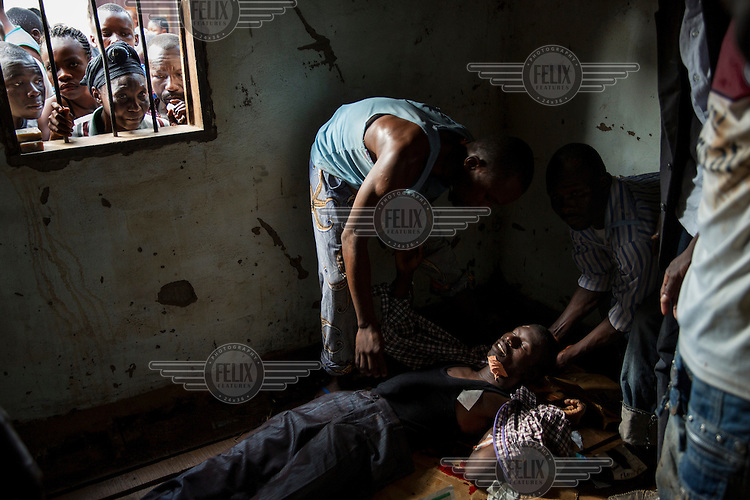 Relatives of 20 years old Sept-Abel Sangomalet gather to mourn his death. He was stabbed to death by Muslims while sleeping in his family home. His body was found outside the house.

In December 2012, a rebel coalition calling itself 'Seleka', meaning 'Union' in the local Sango language, toppled the government of President Francois Bozize, accusing him of not abiding by the terms of earlier peace agreements signed in 2007 and 2011 which ended earlier conflicts. Rebel leader Michel Djotodia declared himself president and was recognised as a transitional head of state at a regional meeting in April 2013. Though Djotodia soon declared Seleka disbanded, renegade rebels continued to loot, rape and pillage and the conflict began to develop along sectarian lines with the mainly Muslim Seleka fighting Christian vigilantes calling themselves Anti-Balaka (or Anti-Machete). In early December, the French government decided to increase the numbers of troops it already had in the country on a peacekeeping mission, granting the troops the power to use any force necessary to protect civilians. The UN has warned that the country runs the risk of descending into a genocidal struggle.
William Daniels / Panos Picture /Felix Features 9 Dec 2013
Not available in France.