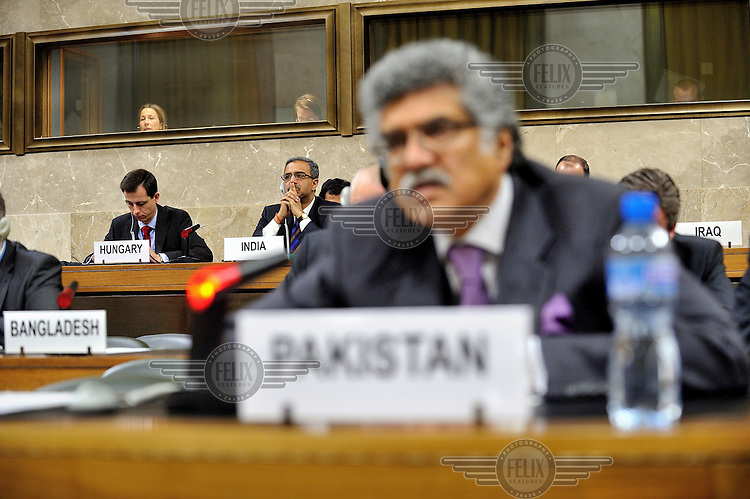 DB Venkatesh Varma, Permament Representative of India to the Conference on Disarmament, listening to Ambassador Munir Akram addressing the conference, who stated that the security of some could not come at the cost of the security of others. Pakistan has vetoed the last several attempts at producing concensus on a program of work, due to inclusion of issues relating to a possible 'Fissile Material Cut-off Treaty', which would effectively oppose its ability to produce the material necessary for its nuclear warheads; essential in what it sees as its defence against its neighbour, India.
The Conference on Disarmament, established in 1979, is the only forum for nations to discuss multilateral arms control and disarmament issues. It has a primary focus nuclear weapons control and disarmament. 65 countries, and 38 observer nations, convene annually at the United Nations' Palais des Nations building for three sessions of talks totalling 24 weeks.
Conference on Disarmament. Year 35, 2014 Session 1, Plenary meeting 1308. Presidency of Italy
Mark Henley/Panos Pictures /Felix Features 3 Mar 2014
Not for sale in Japan