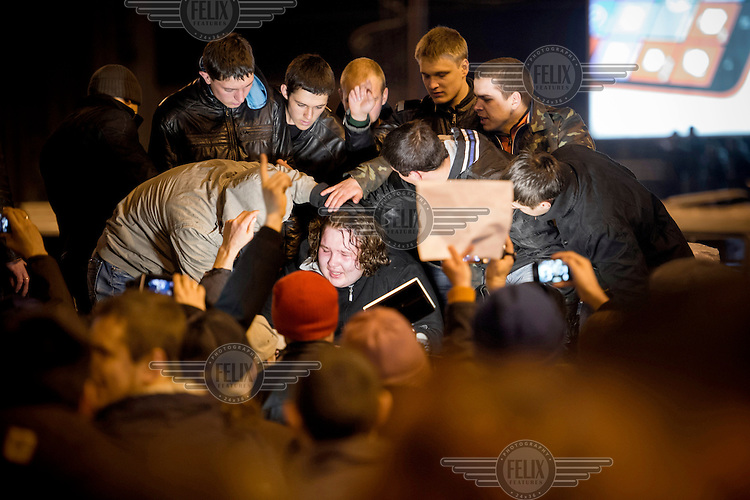 Pro-Russian supporters humiliate a pro-Eu demonstrator by forcing him to make self-denouncing statements that are then recorded on video at a rally where pro and anti Russian demonstrators clashed in Donetsk.

At the end of a rally in Donetsk, pro-EU demonstrators were confronted by hundreds of pro-Russian supporters who attacked the group with sticks, bats, pepperspray and fireworks. The violence resulted in one dead pro-EU demonstrator and many others injured. The Ukranian government accused Russia of sending agitators to the east of Ukraine to spark violence in the run up to the 16 March referendum in Crimea. According to local officials, some 95 % of voters supported union with Russia.

Demonstrations in the eastern cities of Donetsk and Kharkov in the days before the 16 March Crimean referendum led to several deaths in violent clashes between pro-EU and pro-Russian supporters.

Donetsk is the largest city of the Donets Basin (Donbas) region, an area that is the centre of Ukraine's coal mining and steel industry. The Donbas region used to be the power base of Viktor Yanukovych, the now deposed former president, who has fled to Russia where he is being supported by the Russian government as the rightful head of state of Ukraine. Lately Pro-russian protests in the eastern part of the country are calling for greater autonomy from Kiev and a referendum on secession from the western part of the country.
Jeroen Oerlemans / Panos Pictures /Felix Features 13 Mar 2014
Not available in the Netherlands or Belgium.