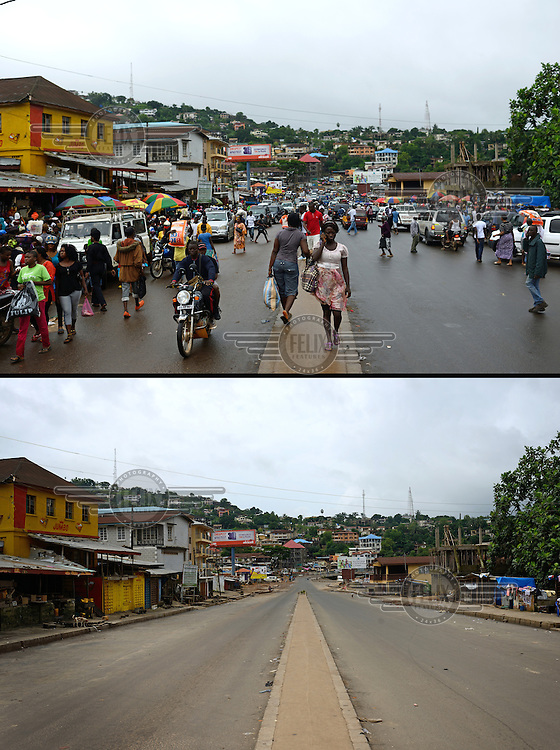 A diptych showing the main street of Freetown market, usually crowded with people but completely abandoned during a national lockdown which was declared by the Sierra Leone government on 19 September in an attempt to contain the spread of ebola in the country.

Sierra Leone is one of three countries severely affected by the Ebola outbreak in West Africa which started in Guinea in December 2013 and spread to neighbouring countries including Liberia, Senegal and Nigeria. By late September 2014 it had killed close to 3,000 people across the region, 554 in Sierra Leone alone, making it the worst outbreak of the disease since it was identified in 1976. It is believed that the reported number of cases and deaths may well exceed the official figures due to an unwillingness to report cases among the population and a lack of resources to properly investigate suspected cases. Ebola virus disease (EVD) is a disease which affected humans and other primates and is transmitted by coming in contact with blood or other bodily fluids from infected persons or animals. It is believed that the disease is carried by fruit bats which can spread the virus without being affected themselves. In parts of West Africa, the consumption of so-called 'bushmeat' is thought to have caused the most recent outbreak.
Samuel Aranda / Panos Pictures /Felix Features 18 Sep 2014
Not available in Spain.