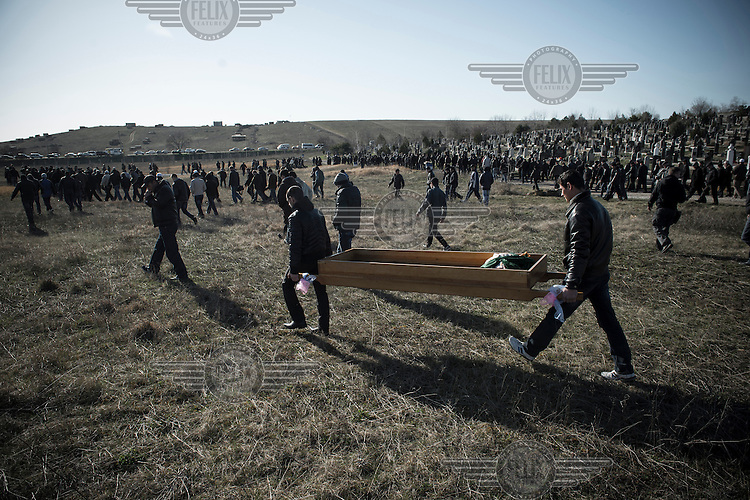 After the funeral, tatar men take away the stretcher with which the corpse of Reshat Ametov was brought to the cemetery.
Ametov was a Tatar who had been protesting against Russian troops in the Black Sea peninsula. He was found dead two weeks after he was seen being hauled away from a protest rally by men in military-style jackets. His body was dumped outside the town of Belogorsk with transparent tape wrapped around his head and hands. He bore marks of a violent death, indicating he may have been tortured before his death.
Tatars have lived in Crimea for centuries but in 1944 Stalin punished the entire tatar population for collaboration wth the German occupiers by deporting them to Uzbekistan and other parts of the former Soviet Union, despite the fact that many of them fought in the Red Army. The Tatars were only permitted to return to Crimea in the late 1980s at which point they were given land which nobody else wanted. Many Tatars fear that they will be second class citizens again if Crimea joins Russia.
Jeroen Oerlemans / Panos Pictures /Felix Features 18 Mar 2014
Not available in the Netherlands or Belgium.