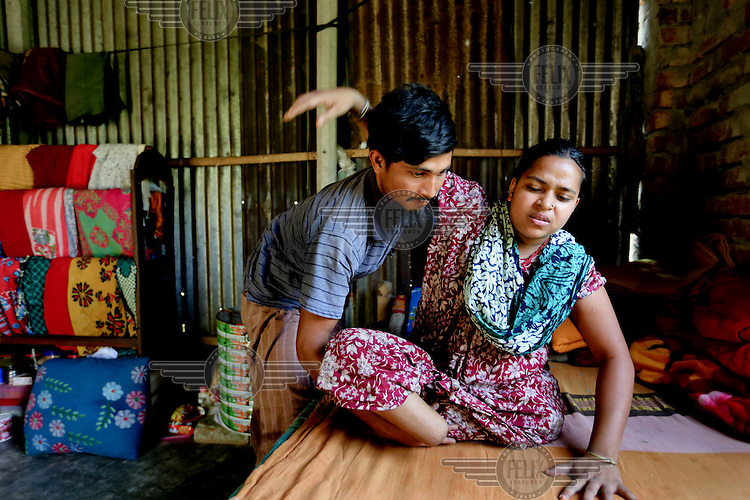 Rebeka Khatun helped by her husband. They were both sewing machinists at a garments factory at the Rana Plaza. After the building collapsed Rebekah was trapped beneath the rubble for 20 hours and had to have both legs amputated. She was hospitalized for 10 months and underwent eight operations.

The eight storey Rana Plaza complex, which housed a number of shops and offices as well as five garment factories that employed more than 3,000 people, collapsed on 24 April 2013. When the search for bodies ended on 13 May 2013 the death toll had reached 1,129, a further 2,515 people were injured. The day before the collapse a structural engineer had warned the businesses inside to immediately evacuate the building. Many did, but the garment workers were told to return to work by the factory owners and the building's owner, Mohammed Sohel Rana, who is a member of the ruling Awami League's youth front. Afterwards some workers said they had been forced back to work with threats of violence and withholding of pay. A report produced by the Bangladeshi government stated that Sohel Rana illegally added several upper floors to the building which was not designed for the extra weight. Furthermore the huge generators installed on the upper floors, needed to power the factories, shook the entire structure and when they were started on the morning of the disaster it was their vibrations that triggered the collapse. 32 brands sourced clothes from the Rana Plaza but only half of those have contributed to a compensation fund and of those that have only Primark have made a significant payment.
G.M.B. Akash/Panos Pictures /Felix Features /Felix Features 14 Nov 2014