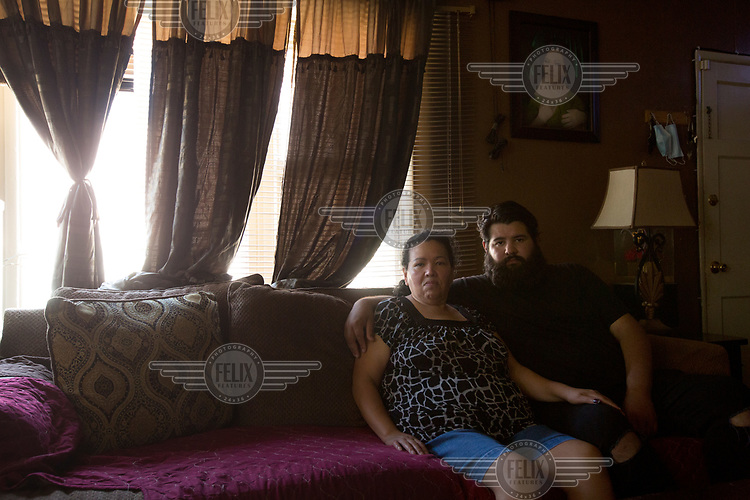 Alejandro Ortega Picón, 27, sits on the couch with his mom, Maria Luisa, 54, under a photo of his mother at her house in Cudahy, California, on July 7, 2020. He is a DACA recipient and an essential worker at BNSF Railway.

Alejandro Ortega Picón came to the United States from Guanajuato, Mexico, when he was eleven. Alejandro’s father started working with drug dealers, unbeknownst to his family, and stole some drugs from the wrong people. He then took off. When they came for Alejandro’s mother, she took her two sons and fled to the United States. The two boys were told they were going on a vacation. At first he was bullied and beat up. He learned English by watching cartoons and eventually found his friends and his American identity in high school. Alejandro started college, but had to drop out to support his family. DACA helped him to find a job that allows him to do so.
Now, he works twelve, sometimes fifteen, hour shifts as a crane operator and driver for BNSF Railway. They send freight around the United States and work with companies such as UPS, FedEx and Amazon Prime. When the pandemic hit, business picked up at BNSF Railway. Some people began to take time off. Alejandro couldn’t afford to do that. He had to support his mother, brother, and his girlfriend. It angered him that a multi-million dollar company could not supply their employees with hand sanitizer and masks. Alejandro recently found out that one of his co-workers just died from COVID-19.

-According to recent L.A. County Department of Public Health reports, Latino residents are more than twice as likely as white residents to contract the virus.
Quotes:

“A lot of people decide to take some time off. I didn’t, I have people depending on me. I have my mom, my brother and my girlfriend.”