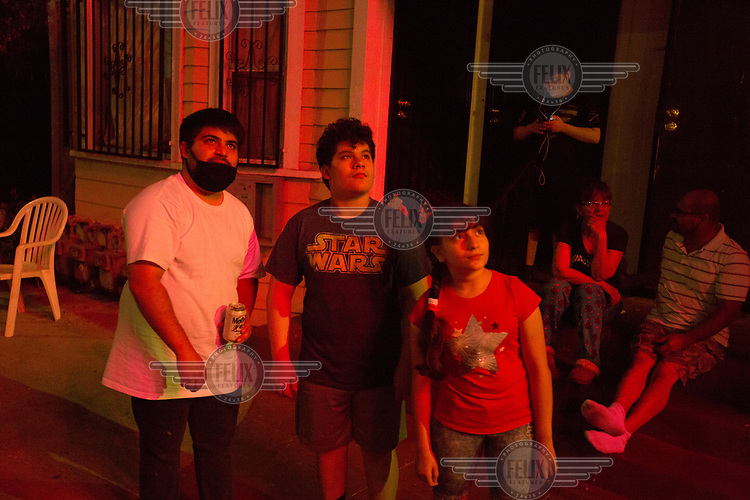 Osvaldo Ozuna (in white), 27, watches fireworks with his family during a fourth of July celebration where they live in Los Angeles, California, on July 4, 2020.
Ozzy and his parents took in his three nephews and niece when his sister was deported. Ozzy is DACA recipient and an essential worker at Trader Joe's, a grocery chain, but his true passion is filmmaking.

Osvaldo Ozuna, 27, is a Mexican-American filmmaker born in Ensenada, Baja California, Mexico. At age ten, his family made the difficult decision to immigrate to the United States due to the lack of financial and educational opportunities. Although Ozzy works at Trader Joe’s to pay the bills his true passion is film making. Santa Monica College selected his first film, MUÑECAS, for production. While he was finishing the film, his sister was deported, and three nephews and one niece came to live with Ozzy and his parents. He took them under his wing and helped them to emotionally recover from the traumatic event. He also works to foster their creativity and helps them with their schoolwork. MUÑECAS became a success, and went on to win several awards in the midst of a divisive political climate on immigration. Now, Ozuna is finishing his second film, called INK.

“All that experience with feeling like I didn’t truly belong with the Mexican culture, the Mexican-America culture, or especially the America culture, because of who I was, it made me a very observant and introverted person. It created an interest in me in trying to figure out what identity is and what role culture has in shaping our identity and who we become.”

“When DACA happened, it was a big boost. Prior to DACA, I was working at a couch factory. It was the only thing I could get with no documents. It was working long hours less than minimum wage and just being
Ivan Kashinsky/Panos Pictures 4 Jul 2020