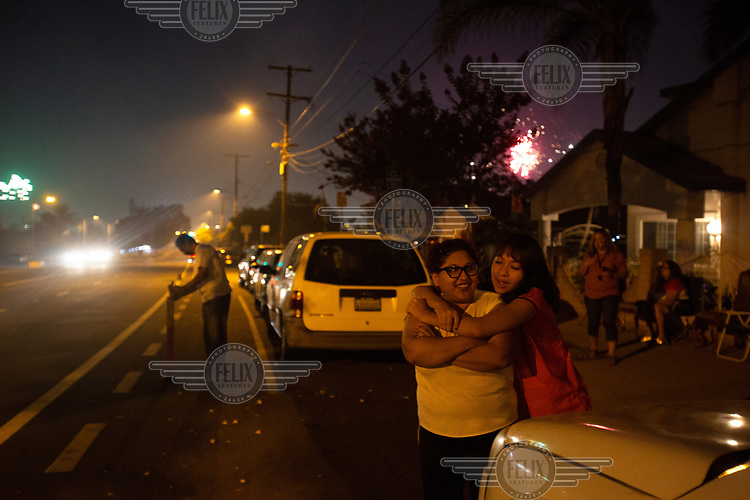 Rosa Barrientos and her family celebrate 4th of July on July 4th, 2020 in East LA, CA. Rosa Barrientos has always lived in East Los Angeles with her parents and younger sister. She moved to Sacramento for college and worked in DC for CHIRLA, but came back to work in LA this past January to be close to her family.


Rosa Barrientos immigrated with her family from Guanajuato, Mexico to the U.S. when she was 4 years old.
She never talked with her parents about being undocumented until she got a scholarship in middle school to pay for college and realized she needed a social security number to accept it. When she graduated high school the DACA program passed and she was admitted to UC Santa Cruz. When she went to orientation she realized her family couldn't afford it so she enrolled in a community college. This is when she got involved with the Coalition for Humane Immigrant Rights (CHIRLA) and it opened the doors to a new reality of a life of activism. She currently works for CHIRLA’s youth branch as the CA Dream Network Northern Region Organizer, the largest network of undocumented students in California, organizing undocumented youth to not only fight for the Dream Act but a Comprehensive Immigration Reform. During the pandemic she continued her work making sure people understood their tenant rights as to not get evicted during the pandemic. She also organized DACA recipients, getting together for early morning vigils at different locations to be visible to the community. She also aided undocumented immigrants in applying for disaster relieve asistance to get a $500 dollar check. CHIRLA assisted about 40,000 people in Los Angeles and Orange County. She says she was super shy growing up, a closeted undocumented person, she decided to share her own story and heal all the trauma of hiding who she was and feeling ashamed of her heritage. Being an activist helped her become "unapologetically undocumented," she wants to continue building the road for new generations to
Karla Gachet/Panos Pictures 4 Jul 2020