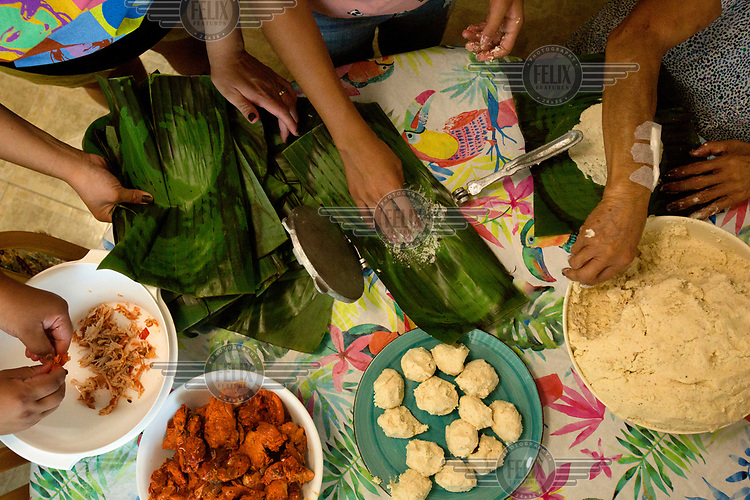 Karina Pantoja makes tamales with her mom, Ruth, sister-in-law, Yuliana, and niece, Yanelle at her parent's apartment in Whittier, CA, on August 16, 2020. Ruth was teaching them how to make tamales in the traditional way that they make them in the Yucatán, with Recado rojo, a red paste that's mixed with the chicken. Yuliana wore a traditional Huipil dress for the occasion, also from the region.

Karina Pantoja works as a Community Dental Home Coordinator for Altamed. She coordinates the appointments, works as an assistant for the dentist and is instrumental in communicating with Spanish speaking patients and translating. When the pandemic first started she was switched to a COVID-19 testing site. She worked there for three months and everyday she would return to her parent’s apartment were she lives. She is also responsible for taking care of them, especially her mother, who is high risk. Her mom has kidney failure and diabetes.

During that time she was fearful she would take the virus home to her parents:
“I had a trash bag next to the door. I’d undress and take off my scrubs and then I would run to the restroom and shower there.”

She was able to help Spanish speakers at the testing site:
“I speak Spanish. I was able to communicate with that part of the community. Some of them were afraid and mislead. It was nice to be able to help them and ease down their anxiety.”

Both her mom and her dad were janitors and helped her make it through school. She was born in Merida, Yucatan, Mexico, and came to the United States at the age of 9.
Ivan Kashinsky/Panos Pictures 16 Aug 2020