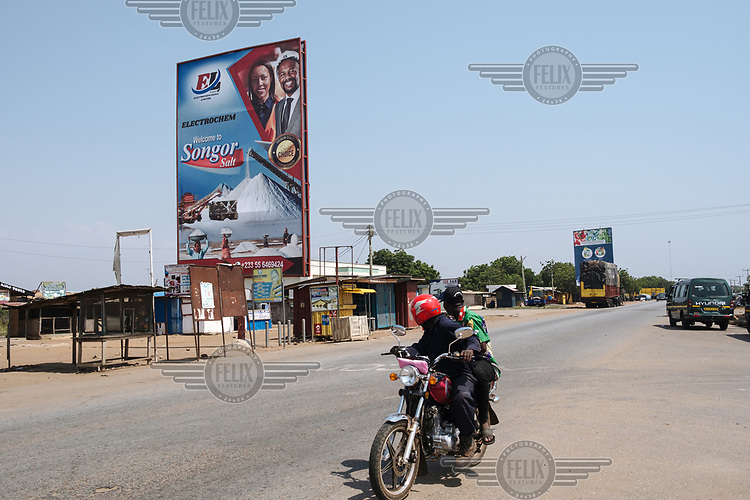 A billboard advertising Electrochem Ghana Limited's Songor Salt project on the highway through Sege, the closest town to the company's operations. Belonging to businessman Daniel McKorley, the company was granted a fifteen year lease to the salt-rich Songor Lagoon by the government of Ghana, under circumstances that remain unclear.

The salt-rich Songor Lagoon was historically a communal resource managed in trust for the people of Ada by the leadership of the clan to whom, according to legend, it was bequeathed by the spirit of an old woman (the 'Yomo'). Anyone could win salt in exchange for a tithe, and it was an important source of financial independence for women. In more recent times, individuals began to imitate commercial salt production methods, leading to the creation of private pans (locally known as 'atsiakpo') in and around the lagoon. Fuelled by greed, self-interest and corruption, the phenomenon exploded, all but killing off the communal way and threatening the very lagoon itself. Those who lack the means to establish their own pans are reduced to labouring for others, a situation that disproportionately affects women.
Nyani Quarmyne/Panos Pictures /Felix Features 10 Jan 2021