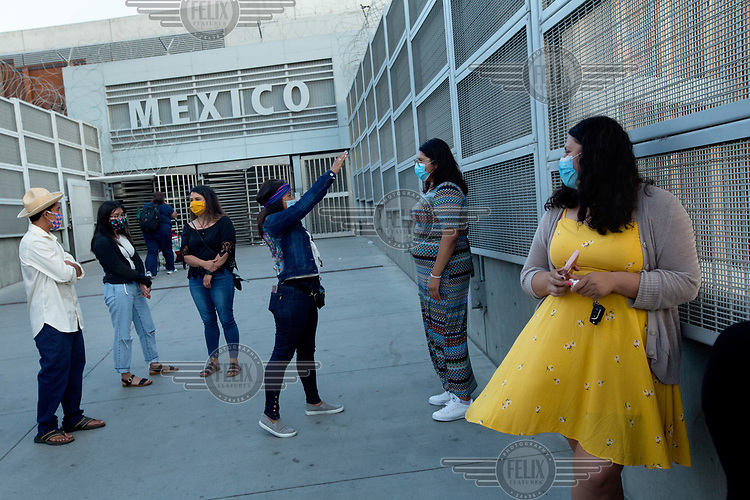 Gloria Itzel Montiela, 33, (yellow dress) stands at the border of Mexico and the United States with other DACA recipients in a trip she organized in San Ysidro, California, on August 1, 2020. Maydelli Mendoza performs a spiritual healing on Basti López.

Gloria's words: A lot had happened regarding DACA in the last two months preceding the border visit—legal victories and legal blows. When I shared my own visit to my FB groups for my US anniversary, it was met with a lot curiosity and shock because people didn’t know we could get that close. Also, Cristian (owner of food truck) let me know that he didn’t know any other DACA recipients in the area. At a time when things are so uncertain for DACA recipients (because of COVID, because of the endless legal battle over DACA) and everyone is so far apart (because of COVID), we have to come together. Few other people know what it’s like to have our lives turn into a political rollercoaster. This trip was not about politics. It was about creating community and giving my fellow DACA recipients the space to overcome the fear or that the border symbolizes for each one of them. It was about getting them to reflect how far they have come individually and how far we’ve come as a community.


Gloria was a key figure in working with the Orange County Health Care Agency to allocate three million dollars to address COVID-19 disparates impacting Latinx families in eight Zip Codes. Gloria is a DACA recipient and an essential worker.

(From Gloria’s Bio) Gloria Itzel Montiel, Ph.D., is a DACA recipient and a Southern California-based health equity leader. Born in the small town of Coacoyula, in Guerrero, Mexico, she immigrated to the United States at the age of eight and navigated the education system as an undocumented student. In 2005, she became the first student from Santa Ana High School to be admitted to Harvard College, where she earned her bachelor’s degree in English and American Literature and Language. She
Ivan Kashinsky/Panos Pictures 1 Aug 2020