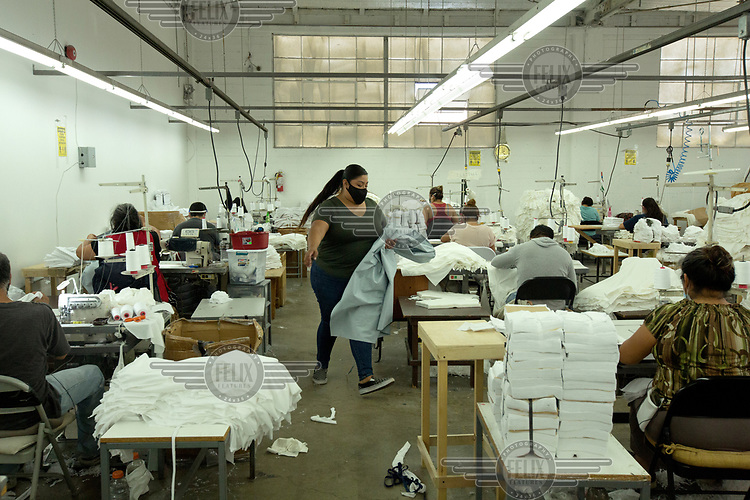 Gisel Villagómez, 33, works as a project and contracting manager in her sister Lourdes' garment factory, 3K Apparel Inc., in Vernon, CA, on July 30, 2020. Gisel is a DACA recipient and an essential worker.

Gisel Villagómez, 33, talks with her father, after she heard that he had contracted COVID-19, with her sisters Lourdes (green) and Carmen in Lourdes' garment factory, 3K Apparel Inc., in Vernon, CA, on June 19, 2020. Gisel is a DACA recipient and an essential worker.

Gisel Villagómez, 33, came to the United States from Mexico when she was two years old. She is the project and contracting manager in her sister’s garment factory, 3K Apparel Inc. The factory has produced over 180K masks and over 100K reusable protective gowns throughout the pandemic. When she was 18, her mom and sister were deported to Mexico. At that point she had to drop out of college to pay the bills. She was hiding in the house during the ICE raid that took her mom. Gisel has PSD from that incident, and often has nightmares of ICE raids. She was picked up by ICE and a bus took her south towards the boarder. Amazingly, the bus pulled over and she was freed at the last minute. Although she has DACA, she feels like she is living in a cage, and the cage is the United States. Gisel feels like people on both sides shame her. The conservatives say she shouldn’t be here, and the undocumented people feel jealous that she has a work permit. Her father contracted the COVID-19 virus and was hospitalized, but has recovered and is now home.

“It was 2007 when they came to get my mom. I was in my room. It was about six in the morning. There was a loud bang and my mom decides to answer the door and my sister was with her. It was just a knock saying open up it’s the police. All of us had just bought that house. That was crushing because I was going to college and I was helping my mom pay the mortgage. So I had to drop out of college to try and save the mortgage. I wasn’t able to. Tha
Ivan Kashinsky/Panos Pictures 30 Jul 2020