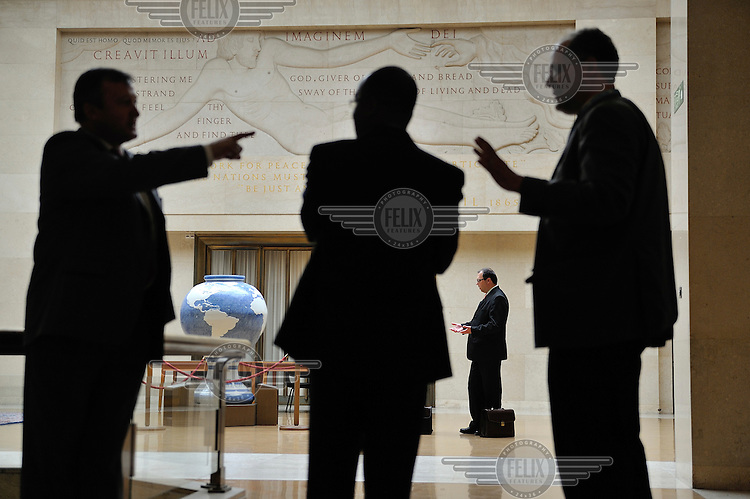 Discussions outside the Council Chamber between diplomats and UN disarmament staff at the Conference on Disarmament. Plenery discussions revolved around the failure to produce a program of work, as well as relative preferences for a Fissile Material Cut-off Treaty as opposed to Nuclear Disarmament, and which extended to an informal session in which civil society and the media were excluded. In review of the day's meeting, one observer stated that the CD 'no longer runs the risk of becoming irrelevant, it is irrelevant.' Deadlock that has prevented agreement at the Conference since it negotiated the 1996 Comprehensive Test Ban Treaty.The Conference on Disarmament, established in 1979, is the only forum for nations to discuss multilateral arms control and disarmament issues. It has a primary focus nuclear weapons control and disarmament. 65 countries, and 38 observer nations, convene annually at the United Nations' Palais des Nations building for three sessions of talks totalling 24 weeks.
Conference on Disarmament. Year 34, 2013 Session 2, Plenary meeting 1288. Presidency of Iran
Mark Henley/Panos Pictures /Felix Features 4 Jun 2013
Not for sale in Japan