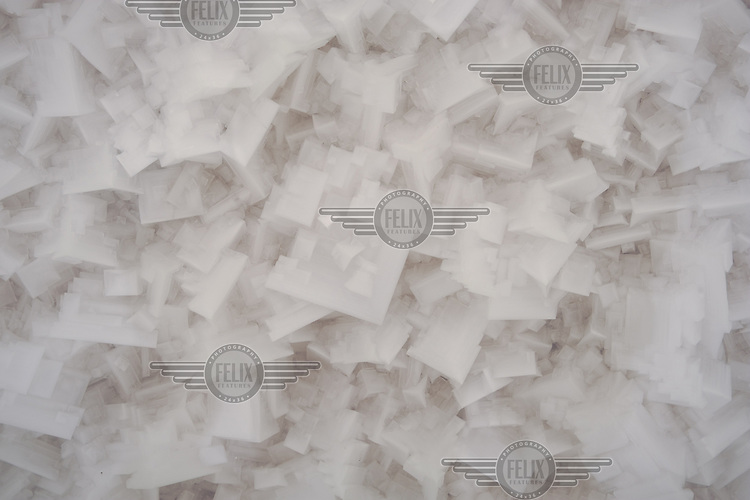 Salt crystals in a salt pan in the 'Yomo', the area traditionally held to be the spiritual heart of the salt-rich Songor Lagoon. It is traditionally taboo to win salt in this area of the lagoon, but in recent years this has fallen away.

The salt-rich Songor Lagoon was historically a communal resource managed in trust for the people of Ada by the leadership of the clan to whom, according to legend, it was bequeathed by the spirit of an old woman (the 'Yomo'). Anyone could win salt in exchange for a tithe, and it was an important source of financial independence for women. In more recent times, individuals began to imitate commercial salt production methods, leading to the creation of private pans (locally known as 'atsiakpo') in and around the lagoon. Fuelled by greed, self-interest and corruption, the phenomenon exploded, all but killing off the communal way and threatening the very lagoon itself. Those who lack the means to establish their own pans are reduced to labouring for others, a situation that disproportionately affects women.

A group of women known as the 'Yihi Katseme' (Brave Women) are fighting to reclaim their right to the lagoon's wealth. In the meantime in late 2020, without public consultation or scrutiny, the government of Ghana granted a fifteen year commercial concession covering the entire lagoon to Electrochem Ltd, a company belonging to local businessman Daniel McKorley. The future of the lagoon and the livelihoods of the 45 communities surrounding it are unclear.
Nyani Quarmyne/Panos Pictures /Felix Features 6 Jan 2021