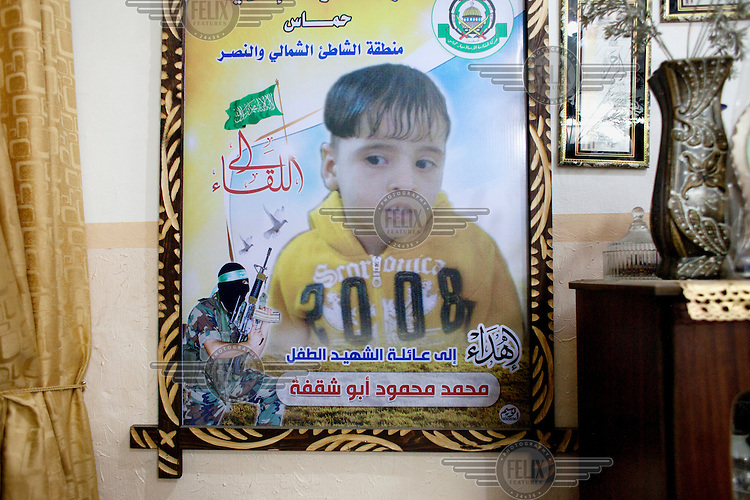 A 'Martyrs' poster showing the dead son of Mahmood Abu Shaqfa. On 7 July 2014, Israeli forces launched a large-scale military operation ('Pillar of Defense') in the Gaza Strip). The operation lasted 51 days and resulted in 2,145 deaths and 11,231 injuries among the Palestinian population. The vast majority of the serious casualties have complex orthopaedic injuries that the Palestinian Ministry of Health is ill-equiped to manage. DFID/UK Aid is funding NHS Doctors, deployed through the UK's Rapid Response Facility's funding, to work alongside Medical Aid for Palestinians (MAP) in providing post conflict surgery at Gaza's Shifa Hospital. The NHS doctors (through the charity Ideals) volunteer to visit Gaza in their spare time and work alongside their Palestinian colleagues.

20 year old Mahmood Abu Shaqfa sustained serious injuries during the offensive. In the same attack his eight year old son sustained mortal injuries. Abu Shaqfa describes the events: 'It was the first day of Eid and we were sitting, all of us, my kids, my uncle and my cousins, outside in the street and the kids were on the swings and then suddenly a rocket hit us directly. Before I entered a coma I remember my little child Mohammed sitting in my lap, looking up at me, he had internal injuries but I didn't know it at the time, for just a few seconds before I passed out I thought he was ok. I saw my uncle's hands bleeding and my cousin lying in the street full of blood. And then I fell in a coma and woke up after eight days. When I woke up I was in Shifa hospital, when I opened my eyes I asked about Mohammed straight away as I remembered him in my lap, they told me he was ok. Then I looked at my leg and hand because I wanted to make sure I didn't lose them, then, I fell back into a coma. Then they operated on me to remove all the shrapnel from my body.

I didn't know about all these martyrs, they didn't want to tell me, I found out my son was dead eight days later. I knew something was strange bec
Abbie Trayler-Smith/DFID/Panos Pictures /Felix Features 16 Dec 2014