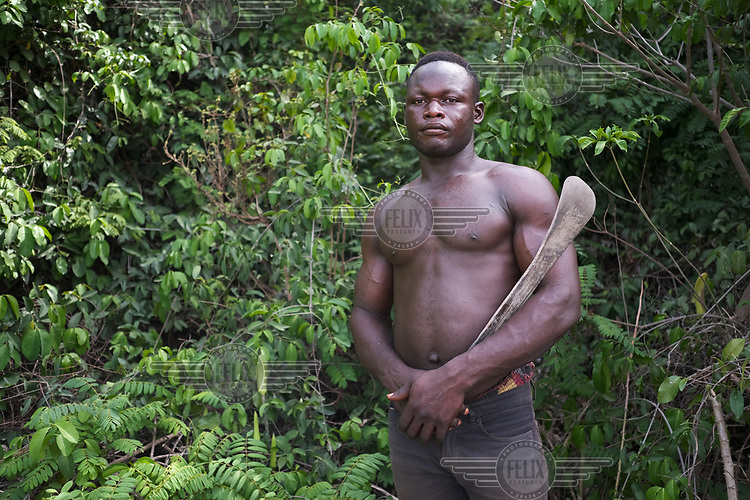 Aboudou Wassiou Dramane (23) clearing land for crops on the edge of a sacred forest in Kikele. The forest is home to approximately 30 white-thighed colobus monkeys (Colobus vellerosus), one of the last remaining populations of the critically endangered primate, of which only 1500 are believed to exist in the wild. Like other residents of the village, he respects the forest's boundaries, and in fact says that he keeps an eye on the monkeys as he works, as they remain at risk from intruding hunters from elsewhere.

The people of Kikele believe they are spiritually linked to the monkeys, a relationship said to date to times when the monkeys' cries would alert villagers to the presence of slave raiders, and thus hold the monkeys as sacred. Despite this, the forest was allowed to dwindle to only 13.4ha, encircled by human settlements and agricultural land. The situation is illustrative of the widespread reality that burgeoning population growth continues to result in the alarming loss of forests and the biodiversity they support.

In Kikele the forest and monkeys are now being actively protected. However, at present the monkeys are effectively both protected and condemned - there is no room for their population to expand, and villagers will not countenance some of the monkeys being moved to seed populations in other more viable forest tracts because of the spiritual bond that they believe exists. Ali 'Baba' Biao, a local who instigated moves to protect what remains of the forest, hopes that it will be possible to purchase and reforest an additional 30ha tract of agricultural land, but at present no funds for this are available.
Nyani Quarmyne/Panos Pictures /Felix Features 17 Apr 2021